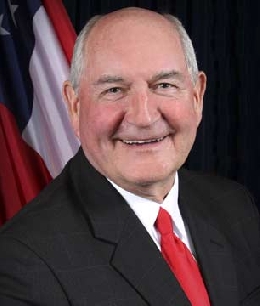 Sonny Perdue was sworn in as Georgia’s 81st Governor on January 13, 2003 and immediately went to work reforming the state budget, setting priorities, and cutting wasteful spending. His efforts helped stimulate the economy and turn the state budget deficit that he inherited into a substantial surplus.  During Perdue’s first term, Georgia created more than 200,000 new jobs and posted the highest graduation rate and SAT scores in state history. He dedicated his administration to attracting new businesses and jobs to Georgia, improving the quality of programs that touch the lives of children, and fighting for a comprehensive ethics reform package. His term ended in 2011.

Perdue’s appearance at the GABB will be shortly before the Nov. 4 general election in which his first cousin, David Perdue, is the Republican candidate for U.S. Senate. The GABB is the state’s largest professional organization dedicated to buying and selling businesses and franchises. The GABB meeting starts at 10:30 a.m. at the South Terraces Conference Center, 115 Perimeter Center Place, Atlanta, preceded at 9:45 a.m. by a free light breakfast and networking session.